A friend asked me recently about the concert I attended for 30 Seconds to Mars and I suppose I summed it up with, “It was loud.”

Jared Leto is the leading front man of the band, and by most accounts of the American Dream he is successful. In addition to being accomplished actor and rock star, he still looks good as a 42 year old. I’m amazed at what he’s been able to do in the life he’s been given, and how he continues to make it new and real with his stage presence like in Lima, Peru the other evening. There are thousands and thousands who’ve joined the official “Echelon” fan club and feel uniquely attached to him. I don’t know if any of that has to do with that with his current hair style he looks like Jesus, but that night it seemed like his love for them was mutual.

I first began to listen to 30 Seconds to Mars because my brother let me borrow an album. Their 2005 album “A Beautiful Lie” marks a trip to the Southwest 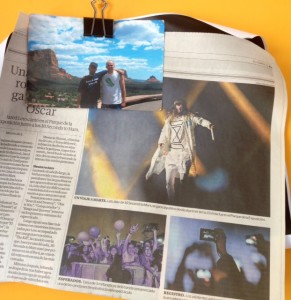 desert I made with my brother in 2007, of which a picture hangs in my room. I remember most of those songs as a soundtrack to the strange and alien-like territory of the Arizona desert. They all sound like freedom, of a wide expanse of sky and tanned earth, of new possibility, and I know that the trip, my brother, and those songs are the landmark of a time period that set in motion the dramatic changes I would make in the years to come.

I had always wanted to see 30 Seconds to Mars in concert for their music and for experiences like the desert, and it took almost seven  years after that first listen for me to finally see them live. I carry with me certain desires that I just can’t let go, especially if I know they are possible. Seeing 30 Seconds to Mars for their music, for the mark they helped make seven years ago, for the completion of a goal was why I went to see the show that night, and it was everything I needed it to be.

My thoughts were illuminated by the army of synchronized stage lights as Jared sprinted like a boy out of school for the summer. It felt and sounded like a hundred explosions, and part of me thinks that’s part of the energy released by the fans who waited years for the band to come. (They had never visited Peru, up until this date.) I thought about all the waiting, and the excitement and the fact that in approximately an hour and a half the concert would finish. I thought about what I’ve done (and not been able to do) in Peru and it all just seemed to make me a bit sad that someday it’ll be over.

What an injustice. We spend so much time waiting for something important to arrive, and when it does, it touches lightly on our stop, and speeds on to it’s next destination. It feels so disconnected: the time waiting, and the time experiencing. Maybe that’s my problem, that it seems to be related, but really it’s so callously independent. I hope that’s what Jared recognizes too. That we, like him, wait for something, and that we know, ashamedly, that it will end quickly. Are we ashamed that we were bound by something we had to wait for, or because we felt we had no choice in the matter?

I remember reading Dylan Thomas in college. My English professor enjoyed him and T.S. Elliot, so that’s how I got introduced, but for most of America we know of his famous poetry because a stanza was once paraphrased in Independence Day. It’s from the same poem I remembered in college, and the one I drifted towards this concert night, “Do not go gentle into that good night.” Dylan wrote it about his experience of his dying father, but the words, so brilliantly infused with emotion, have been used by coaches, leaders and politicians for decades:

Do not go gentle into that good night,
Old age should burn and rave at close of day;
Rage, rage against the dying of the light.

Though wise men at their end know dark is right,
Because their words had forked no lightning they
Do not go gentle into that good night.

I returned to the thought about the magnificence of a person like Jared with this notion of things ending much sooner than we think they should. I think consciously or unconsciously he knows that; like many people great and 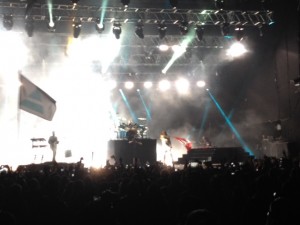 popular, and others great and still unsung, they realize that life indeed is so very short, and ends before we’re comfortable with it. Indeed, we are not the masters of our time.

For that reason, I believe that when Jared and his brother, Shannon, arrived for their first concert in Lima they did it in such a fashion of extravagance of sound and energy to prove to us that even though an end will eventually cap the evening, and the thousands of miles and mountains of hours, indeed the years waiting for their arrival, will all feel like the brush of the wind from the passing of an express bus, they will stand before the multitude of eager and spellbound fans and will not go quietly into that good night.

Because if death marks its end with silence then we must be loud to mark the time we were alive.

Most importantly, it is yet another reminder that there is still too much silence in my life. That there will be a time to be quiet, but that time is not now.