Last week, I was working on a special project that brought me face to face with many of the people that we’ve served over the past year. Come to think of it, I’ve met hundreds and hundreds of people in 2011. All very different from me. Teenagers with children, married, and working manual labor jobs. Single mothers supporting their family of four on a couple dollars a day who smile and ask me about my family, and where my children are (not if I have children, but actually, the location of them). Haitian church choirs of women who need to dance when they sing. (How else can you stay on beat?)

Grandfathers that lived through two dictators and chuckle about the problems of the current administration. Small children playing with broken two liter bottles as toys. Grandmothers that emigrated from Haiti 70 years ago. Men working 10-12 hours a day cutting sugar cane by hand six days a week and earn $2.50 for 2,000 pounds of sugar cane. Aggressive bus drivers weaving through busy city streets that come to a complete stop, turn and face their passengers to bid farewell with “Vayan con Dios” (Go with God) to which I think: “We’ve already being going with God, because I’ve been praying we’d make it here alive.”

And all of these people just knew a couple words of English.

I am grateful to God for this opportunity to serve with such inspirational people and for learning the Spanish language. I’ve realized that Spanish was the key that unlocked this opportunity to serve and to meet such amazing people over the past year. I am grateful that even “starting late” in life for attaining fluency, I am now able to tell my stories and jokes in Spanish (I’m still working on my delivery in both languages though). Most of all, I’m grateful for being able to participate in the work of HOPE International and especially for their local partner in the Dominican Republic (DR), Esperanza International. Here in the DR, we have been able to impact over 50,000 people this past year through our community banking services, medical, dental, and educational programs. 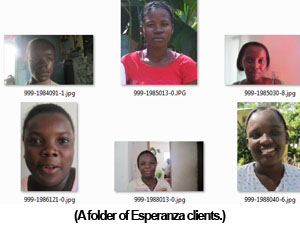 So, as I was working on this project last week I was thinking about these people that we serve; and I was doing it rapidly. With the new launch of Esperanza’s web site: www.Esperanza.org we have been uploading all the client photos so that they will be integrated into the online donation system. Since we have thousands of clients, we had to work quickly to format them to upload them to the site. I could do a photo in a little over a minute and I was flying through the folder shown here in the picture to the left. 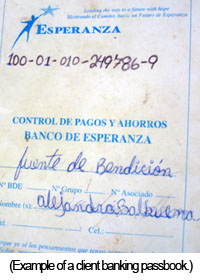 “Well, it usually means they emigrated here from Haiti.”

If you don’t have a “cedula” (a national ID) number you cannot get a job and are therefore disqualified from any government services. What it means is that as far as the level of poverty is concerned, these “999” women are the poorest of the clients that we serve. They have no official documentation and when they become a client with Esperanza Internacional, it is the first official document with their name on it that they receive. It is a way of recognizing them as a unique individual, someone who is publicly recognized in the community where they live.

Our photo upload project requires us to look up their number. Let’s take for example the woman in the top left of the picture in the group of six above. You cannot see her face that well, because of the light streaming through the door in the background. The light interests me as I log onto the system and check out the details of this woman. Turns out she’s not just a number, she has a name, like you, and like me, and like every single person I’ve met this past year. 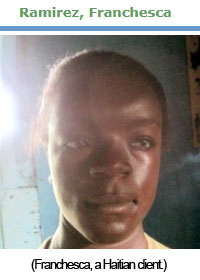 Her name is Franchesca Ramirez and she is a member of the community banking group called Bendiciones de Dios (Blessings from God). She’s my age, married, and has two children. Her microloan was for $160 dollars over six months for her small business of selling clothing in her local community. Immediately, a story fills in the details of her life, much like that light in the background fills up the room where she sits.

This is the same manner in which I’ve met everyone over this past year: It first starts with a face, then a name, and then a story. The light moves from one detail to the next and gradually presents a story of a life, of a woman providing for her family, making them meals, sending children off to school, and singing them songs or telling stories to them before tucking them in at night. She’s one of the hundreds of people I’ve me this past year, one of the thousands that we’ve impacted in 2011. Her story reminds me of one of the truths I have learned over this past year:

Each one of us has a story to tell.

I think about that light behind Franchesca again. The light of the sun that rises and sets for us, those who speak English, those who live in America, those who have children, and those who work during the day to put food on the table and spend time with those they love before retiring for the evening. It’s the same light that shines for the millions of people throughout the world day in and day out. It is the light that shines for everyone and gives us each a story.

*Update: I’ll be sending an email about coming back to the Dominican Republic in January in a few weeks.