I live two blocks from a park by the sea. It’s not a forest though, it’s more like a beach. A beach that’s open to everyone. It’s free, it’s fun, and it’s family friendly.

I spend a lot of time there, mostly playing sand volleyball. You may ask why I don’t go there to swim. Nobody does, the water isn’t safe because of the amount of local pollution and runoff from the close proximity to the city. But that’s beside the point; I go there to play volleyball in my bare feet.

Onlookers marvel at the two pristine courts complete with poles, nets, and lined boundaries. Dominicans comment that in a city that struggles with immense traffic jams when there is even the slightest bit of rain, two uncompleted unsightly apartment/shopping towers nearby, and plenty of old buildings that should be but can’t afford to be razed, at least we have excellent sand volleyball courts.

Normally I just kick off my flip flops and get in line. Yes, you usually have to wait in line because someone is always on the court. I have a ball, which is an advantage for me, because it usually means I get to play, and even though I’m a bit taller than 6’3″ I still can’t spike the ball well. A local young women’s volleyball team has taken it up themselves to teach me how to “Matala, no son de tu familia!” (Kill it “the ball” they aren’t your family). 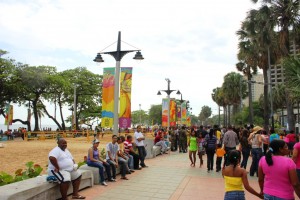 Most of those waiting in line are eligible volleyball players. They’re loud, aggressive, and fit the height requirements, but there are always those, usually small kids that are relegated to the sidelines to chase the balls. I’d be cast off as well if I didn’t have my height or my ball and a little bit of athleticism.

This past Tuesday night we had a group in town visiting the schools we work with. Even though it was late in the evening, we all went down to my second home, Playa Guibia, to play some volleyball.

Good thing I had my ball, because after a local crew bowed out for the evening, we were able to continue playing.

I noticed that our ball boy for the evening spent his time alternating between making sand angels and swimming in the sand, but when the ball rocketed past the boundaries from a spike or an errant hit (much more likely) – our friend immediately stood up and went on running for it. He sped off in its direction and returned with ball and looked like, well, you know, an 8 year old boy who’s overjoyed to have a chance to participate. I mean, each time he brought back the ball, it was like he was being given an opportunity to be involved in the game of adults. He had a job. He had a purpose.

I spotted him all over the courts. If he wasn’t making sand angels, he was building castles or subdivisions to those castles. (It was pretty clear he was astute in both ancient and modern residential architecture). He seemed very busy, but nevertheless he was happy to be interrupted, always happy to play with us.

As the night went on, I thought to myself that his parents must wonder where he is, and would frown at him dirtying up his pants with his chorus of angels across the sand, but then it dawned on me, that he didn’t have parents, or at least, ones that cared where he was at 11 at night. He asked me for 5 pesos (about 15 cents) and I told him he deserved more for being a good player and fetching us the ball. 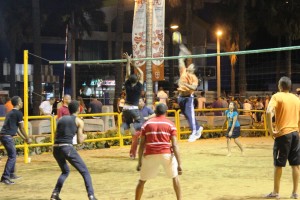 So when the Americans finally got tired and started getting ready to leave, he came to collect his fee. But he wasn’t begging, no, he just wanted to be involved in the game, to be able to play like any 8 year old should. In total, he got 20 pesos, and turned down an offer for a bottle of water. He slinked away and headed back out to his vast playground.

I took a look at the ball I held. It showed signs of serious wear, in fact, the stitching started to bulge where the inexpensive ball took too many hits from my training session with the young women’s volleyball team, which for the record, are still trying to get me to spike it correctly.

I looked at the ball, and then my friend making the rounds in his subdivisions, fleet of angels, and castles in the sand. I called him over.

Holding out the ball, I asked, “Mira ‘manito, tu la quieres?” (Hey little brother, do you want this?)

Two dirty hands reached out and took hold of something so prized, so valuable, so unattainable for an 8 year old of his stature:

A friend and I got a coca-cola and sat down before heading home.

I looked over to the court where we played and I saw a young man finally playing with the big boys. Half their size, he was dwarfed by giants around him, and even though he couldn’t get that ball over the net, it didn’t matter, he didn’t get booted off.

This was his game now, because it was his ball, and you know what? He looked like what an 8 year-old should look like: happy and playing with the big boys.