I often remember a quote from one of my favorite teachers in high school, Ina Baker, when I’m stuck between making a buying decision. She always said, “You vote with your dollar.” We have the ability to help promote the longevity of a business or brand by purchasing more of a product, and conversely, contributing to its demise by not buying.

People beg for money on the streets here quite frequently. My usual rule is that since I don’t know where the money goes, I don’t give out money, or I try to give food instead if indeed that’s what they’re asking. I make exceptions when the person seems out of place, i.e. someone who seems unaccustomed to begging (maybe meaning they really do need the money), and I realize it’s a completely different story when someone is selling something on the street. This person is not begging, no, they are trying to make an honest living by spending their time working. Instead of asking for money, they are doing business.

I love to support people who work hard. Often, when I’m in the communities I’ll buy food or drinks or something else from an associate of Esperanza because I believe it helps to promote what Esperanza and HOPE International believe: a sustainable way out of poverty comes from improving a person’s economic condition.

Walking to the supermarket this past Saturday evening, a voice next to the shopping carts called out to me “Quiere bolas de maiz, a 5 pesos?” (Do you want corn balls, 5 pesos each? – about US $0.15 each) I had my agenda, my shopping list ready, so I paid little attention to the young man, and walked into the air conditioned store. 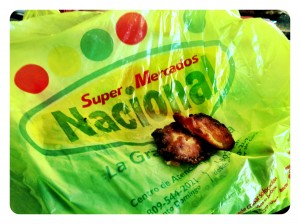 I had just spent $1,600 pesos (about US $40) for some food for the week and had about nine grocery bags in my hands. I heard a voice from the shopping carts again. Something about the meekness in his tone struck me and made me stop to pause my route back home. A young man walked out from the shadows and I could see in his hands a medium-sized tin bowl covered in saran wrap were a pile of fried corn balls.

I felt compelled to buy from him. I wanted to continue what he was doing. Honest work, hard work, at night, in a place that was lonely and challenging. Shoppers were spending thousands of pesos on food, and he was asking just 5 pesos for his home-made goods that most likely his mother made and asked him to sell.

So with nine grocery bags in hand, I reached in to get my wallet. He offered to help me hold the bags. I saw a $25 peso coin and two $5 peso coins. I really didn’t want five of the fried corn balls, and I didn’t want to overpay him (because that’d be too obvious), so I got the two $5 pesos out and asked him for two. He gladly took the money and wrapped the fried corn balls in napkins and gently placed them in one of my bags.

I felt satisfied, but guilty for not buying $25 pesos worth from him, and continued my way back home, wondering how long he was going to stand there selling his home-cooked fried corn balls in front of the massive shopping center in the night by himself.

I know that next time, I’m going to vote for him with my pesos.