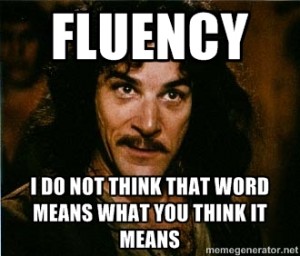 It reminds me of an incredibly common conversation I’ll have with travelers who are just starting out on their journey with Spanish, or have done a few trips into Spanish speaking countries in the past. They’ll describe a week at a resort or a hotel, and they’ll say, “Well yeah, by the end of it I was fluent!”

In reality, I can only imagine what it was like for the native Spanish speaker and the amount of effort they had to put forth to understand the individual and help them out. Probably the conversation was mostly Spanglish with a few Spanish-like words sprinkled in. They say in communication that it doesn’t matter what you say, it matters what was understood. So to borrow the meme from Inigo Montoya of the 1987 film Princess Bride, “Fluency. I do not think that word means what you think it means.”

What I think happens is that during the process, or during the experience, our senses get activated to a new world, and with every step of success we feel energized and motivated. We feel like we are really picking up momentum, really connecting with the individual, and with every affirmative nod of the head, every smile, and every confirmation to a question, we float a little higher into the language atmosphere. It’s so easy to float in it, because learning a language is a social experience and when we share this new learning initiative with another, we naturally are spurred on.

What’s interesting for me is that I feel like I really now know what it takes to become fluent, and for me the meaning of that word had taken on a whole new meaning after a few years. I remember thinking I was “fluent” after three months in Guatemala, only to arrive in the Dominican Republic stumbling for a simple flow of conversation, heck even common words, and conjugations. Dominican Spanish (which I believe is much different than textbook Spanish), is very difficult to understand as it contains an incredible amount of stylistic shortcuts and slang that is native to the country. As is often the case with Spanish accents from the Carribean, it really takes an ear for it, and requires many months, ok to be fair, a couple of years to feel comfortable. 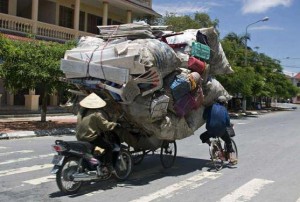 Learning a language takes a lot of work and it’s a sizable commitment. It’s almost like someone asking you to carry something for them as you’re headed out the house. The load is heavy at first, gets easier after awhile, then it changes shape, you get really tired, you lose hope, but somehow you get motivated again. You get some rest, and start out again, but its even heavier this time, but strangely it’s lighter than ever before. Many people come join you on the journey, and then people come along and show you how to carry it. They take some stuff out, show you how to distribute the weight, tell you to put some things on, and after awhile, you don’t even know you’re carrying it, you somehow just wear it, and don’t even have to think about having to put it on.