I watch the news everyday at lunch to be better informed about the city in which I live and to continue my Spanish practice. For the first few weeks, all the new themes and trends were new and I filled many pages with new words and phrases, but then after awhile I needed only to write the uncommon or unusual words down. One of those new words made its way to me by a news story regarding a bus driver who got stopped by a local policeman for not having the appropriate regulatory licensing and stickers on his vehicle. 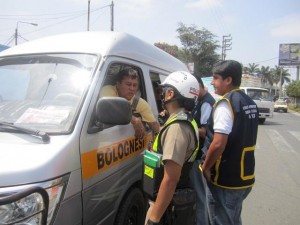 I’ve been stopped many times by police while riding or driving in a vehicle while I’m in a foreign country, and the scene usually plays out the same way. They stop me because I’m a foreigner, and say something to the sort of “It’s hot out here . . .” or “Christmas is just around the corner.” Which is a clue to me that if I want to leave this “routine” police stop within the next hour I should just fork over some cash out of goodwill to my fellow (hungry) man. The Spanish word for this is: soborno (a bribe).

Now, of course, they didn’t ask for a soborno, they merely commented that the hot weather was making them thirsty. If I should choose to give them money it would be towards the quenching of their thirst. Nothing more. Just man to man understanding.

hat was odd about the current news story I was watching was that they caught on film the driver handing over money to the Policeman. The driver knew that he was in trouble. No documents, and a fine was coming his way, and probably he had a few more unpaid fines that would come to the surface if they took him in. He thought to precede this disaster by handing over some money, ever so discretely to this policeman. He gave him a 5 sole coin which is about $1.80.

Could this policeman be bribed with such a paltry amount? Could he be bribed with $18 which is 50 soles? Or for $180 for that matter? Who is to know really. What we do know was that the policeman did have his camera filming the episode from his vehicle. We all know that big brother will influence behavior.

What you’ll find out very quickly in Lima, and throughout Peru, is that these small buses, called “combis” are incredibly common, and are driven by those who live in economic poverty and serve those who can only afford to pay the 20 cent or 50 cent fare, and not a taxi – which could cost $1 or $1.50. Put yourself in the shoes of someone who has to make financial decisions regarding of less than a dollar, and you’ll get an idea of what it’s like to be a driver of a vehicle who can only charge 20 or 50 cents. You’ve got to pick up a lot of passengers to make the kind of income to have any sort of living wage in Lima.

Moving onto the next story, the camera was placed low, on the pavement of the chasis of another small bus, a combi, showing a 20 year-old man, screaming and clinging to the exhaust pipes of the vehicle he had been driving just moments ago. He was stopped at a routine checkpoint and when he wasn’t able to produce his documents, nor account for the 30 some traffic violations he hadn’t paid. He did the only thing he could think of in that moment to save his current predicament. He dove under the bus and held onto metal structure and clung for his life (the metal was probably still hot from just being driven). They pulled him out kicking and screaming (literally). The news had a field day with the absurdity of the scene. 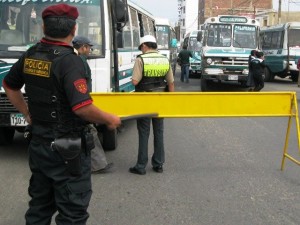 Chasis in Spanish is still “chasis” but the word here is desperation. Economic desperation. Now, I’m not condoning the poor decision-making, nor the behavior leading up to their arrests, but can you imagine being that desperate that you would try to bribe a police officer with $1.80 or scramble under the chasis of your vehicle to avoid getting taking to the police station because you knew what fate would await you?