His eyes say it all. He’s full of joy and he’s curious about the world. I’m standing in his classroom waiting to talk to his teacher, Ruth, which turns out to be his mother. By this point all the kids want me to take a photo of them and they are surrounding me asking to see the photos I’ve taken. Justin is very polite, trying not to push people around and finds my left arm holding the camera. He reaches out for my arm and grabs it to pull himself front and center. When I show him his photo, he looks up and smiles with a look that says, “That’s me!”

At three years old, Justin, is what he should be at that age: kind, curious, and with a heart that opens both ways, to give and receive love. Ruth, his mom, swings around and picks him up, “Oh, mi corazon, tienes hambre? Vamos para la casa de una vez y cocino para nosotros, tu y yo.” (My heart, are you hungry? Let’s go home now and I’ll cook for you and I 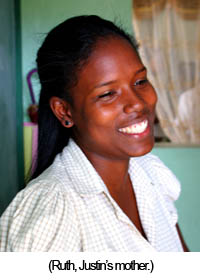 I spend a lot of time around children down here in the Dominican Republic because this year I’m focused on working in our microlending program to small, Christian schools. Public education is so bad in the DR that even though parents can barely afford food and clothing, they will still pay to send their children to private schools with tuition around USD $7-$9 a month. Our microloans are to schools are to build more classrooms and computer labs. Through a partnership with the organization www.Edify.org we are able to provide this necessary capital for schools to grow and receive the resources they need to improve the education that they give to the students. By improving the education for the children, we are able to help put them on a path of opportunity and success for their whole life. 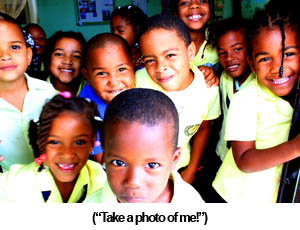 I love it. Working with these schools and their owners to help improve their businesses and their role in the community always brings joy to me. I guess it helps that kids here are like kids everywhere. Full of joy and endless wonder, ready to talk to anybody who walks through the door. At this age, they are full of innocence and possibility.

Justin is a bit shy, and when I try to talk to him, he hides behind his mothers face. So I ask her, “What kind of things does Justin say? What does he do.” She urges him, “Show mommy what you do when I ask you how much you love me.” Justin smiles and stretches his arms out wide.

Ruth tells me, “He loves me this big!” 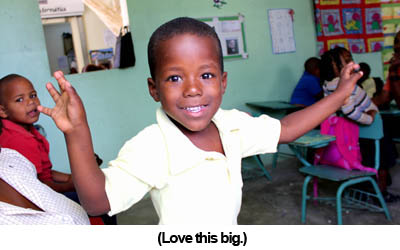 What Happens to All Those Boys When They Grow Up?

It’s Carnaval time in the Dominican Republic. It started from a tradition held prior to Lent, and you can find these parades on every Sunday afternoon in the big cities  throughout the island. I had the opportunity to view a parade with some friends and it was quite intriguing.

Enormous, meticulously decorated costumes are donned by young men and teenagers who march through the streets carrying stuffed pig bladders on small ropes. WHACK! They swing these pig bladders striking unsuspecting bystanders. It’s not so much the impact that hurts, but the surprise by the sudden smack on the back of the leg. Their large masks hide any indication of their next strike, and BOOM! another victim. 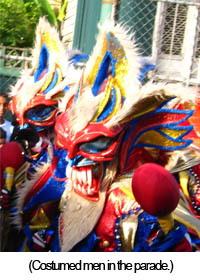 For spectators and most costumed young men, it’s all for fun, a cultural celebration that they’ve been doing for years and years. Standing there watching the powerful swings of the rope by young, skilled, baseball-obsessed young men, I hear the squeals of girls jumping out of the way, and I’m taken back by one thing: the faces of some of these young men. They aren’t smiling. They aren’t really having a good time, are they? Their eyes don’t show celebration, nor revelry in being part of a parade, but simple determination to strike someone else, someone who may or may not deserve it.

Later, a fight breaks out with some of the non-costumed bystanders brought on by limited standing space in a battle of turf and lack of respect. Eyes of hate, seething with revenge. Eyes ready to strike at someone who may or may not deserve it. What’s happened to all those boys?

A Wall Around the Heart

What I saw in the eyes of some of those costumed young men and in the youth who were ready to fight, is what I’ve seen at home in Richmond, VA, or many places in the States, and quite often here in the rough neighborhoods. It’s the response of a boy fighting back.  Taking revenge and doling out some of the hurt he’s received. Lashing back at anyone who crosses the line, and indeed so many have crossed that line over the years since he was a kid. It’s a heart that opens for no one. No 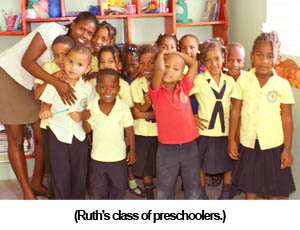 love comes in, no love goes out.

I think about all the young people that I’ve met working in the schools. Hundreds and hundreds of young boys and girls, too young to care about anything else but simply that they just want to know somebody at home loves them and that there will be food on the table when they get there, and they won’t get yelled at for something they didn’t do. But unfortunately, that’s not a reality for most of them. There’s not a safe home to come back to.

They start learning that the world is hard, and it doesn’t care if you haven’t eaten, or that someone hurt your feelings. The best solution then, is to close your heart to the world, because if you do, nothing else can come in to steal and destroy, and consequently nothing comes out to heal and repair. Poverty too, makes that poison of hate even more deadly. It can steal and destroy the innocence of possibility of these young boys and girls even before they have a chance to bloom.

So when I think about Justin, Ruth’s son, at the age of three years old, I know he still believes that the world is good, that he doesn’t need to fight back; he just needs to stand up for himself because he deserves to be treated well. That’s what his mom taught him. In fact, that’s what she shows to all her students. 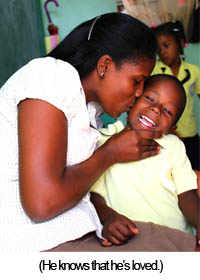 I asked her why she became a teacher here and she responded that 15 years ago she was one of the first students in a class of 50 that the director, Aleyda Torres, taught. What she received as a young girl was a good education, daily encouragement, and above all else, that she was valued and loved. Now, the school cares for over 440 students in the same way in one of the roughest areas of La Romana. Ruth continues:

“I want these children to feel the love that I felt as a young girl. It’s important to me to be an instrument of God’s love and to form relationships with these children, to guide them, instruct them, and love them as my family and the way that God has loved me.”

She goes on to add that a lot of times the students that come to her class don’t have three meals a day, or have holes in their shoes, or they are angry, because their parents are fighting, or their father left, and it’s hard for their mom to raise four kids on her own. Ruth wants to show them a love that covers over these daily hurts and deep pains. She wants to provide them a home, even if it’s just a classroom, where people are respectful and people listen, and everyone is treated as though they matter.

What a child learns everyday they take with them their whole life. Poverty isn’t just about lack of resources, it’s about the loss of hope. That’s what happened to all those young men with no love in their hearts, they stopped believing that people cared. But I want to ask, what does it look like if we start to change the story for those who are still young? And show them that someone cares about them? That it matters what they do and what they believe? What will that mean for them when they grow older?

Jesus said, “Let the little children come to me, and do not hinder them, for the kingdom of heaven belongs to such as these.” (Matthew 19:14)

I pray today that you would see the opportunity to reach out to someone that needs to know that there is still kindness and love in this world.