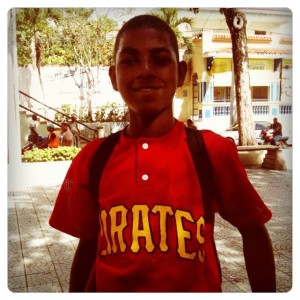 I arrived early to San Cristobal and sat down in the park. A light breeze wafted over the area bringing smells of bread and the fruit being sold on the corner. A lot of people were mingling about and some said “good morning” to me. Back home, people have told me I am fairly approachable, so quite often I found myself in conversations with complete strangers. An other occasions, people have told me that I talk a lot. Well, by one way or another, I find my fare share of public conversation.

In this country, being a tall gringo (here it’s an endearing term) it’s easy to play the game “One of These Things is Not Like the Others” and it usually means I’ve got money in my pocket just waiting to exchanged for some good or service in the local informal economy – at least that’s how I’m seen.

A mainstay of the informal economy are the shoe shiners. Kids carry large emptied tin cans, or small wooden toolboxes around with them hawking their services to anyone who’ll listen. I usually wear sandals outside of work, so I’m immune to the marketing, but in this case, my brown shoes, not all that scuffed in my opinion, have caught the attention of a young man.

He’s willing to clean and shine my shoes for 30 cents. He looks like a decent young man. School backpack on his back. Clean clothing. A smile showing all his teeth. But what I notice is that he speaks with dignity and peace. There’s no quick sell, no hurry, no emotional guilt.  After over a year here in the DR of dodging shoe shiners, I finally comply.

“I’m the oldest. I have two brothers, one sister. But my dad is sick. He used to be a watchman for a bank, but he got diabetes and his foot swelled up really big, so he can’t work, he can’t even walk that well. So to help mom, I have to work.”

“No that’s ok. I ate. I buy breakfast in the morning when I’m out in the streets.” 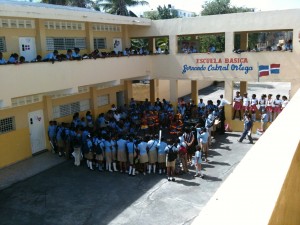 He spoke slowly, honestly, and with intention. Quite eloquent I must say, with a gentle cadence to his delivery. I pay him 20 pesos, because I believe him, and I don’t want him to have to make change.

I doubt 30 more cents would help me more than that family he comes from, and certainly in light of the fact that he refused food because he already bought breakfast. A small part of my cracks inside when I think about him having to buy his own breakfast. For whatever reason he does it, or has to do it, it just makes me sad.

I’m still waiting there in the park. Not much to do, but just taking it all in. About 10-15 minutes later, Ariberto comes back and asks if he can sit down next to me. I say sure. I can tell he just wants to feel some peace in the morning amidst the noise on the streets of commerce. Maybe I’m one of the few gringos who actually talks to him. People have told me I’m approachable . . . haha.

We start talking about life. He asks me what I do. He says that’s a good thing to help people who need it. I ask Ariberto what he’d like to do in the future. He’s not sure. He doesn’t really think about it. He mostly thinks about each day ahead of him. But someday he’d like to own his own business. I’m convinced that for a 10 year old, he is very mature. 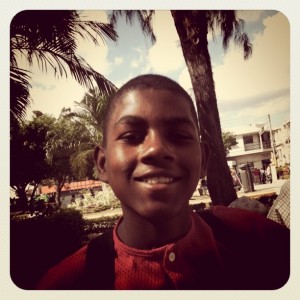 I ask him if he goes to a church. He says, yes of course and he likes it too. I asked him if he believes in God, “yes.” And Jesus? “yes.”

“And the Holy Spirit too. It’s a Trinity you know.” – Ariberto responds.

I like this kid. He’s smart and clever to boot.

“Well you know Ariberto, God has a lot planned for you.” I say. He smiles. I continue,

“I know that he’s got a great future planned for you. You know he’s got big plans for all of us, it’s like Jeremiah 29:11 says “He knows the plans he has for us.” In fact, that’s the verse we use for Esperanza.”

For a second, I think Ariberto enjoys sitting there, not having to be the big brother, not having so much responsibility, not having to work in the morning to help his family, to buy his own breakfast, to carry the world on his shoulders.

We sit there in silence. Make some jokes. More silence. Ariberto politely excuses himself. He’s got to get back to work.

I believe God has good things planned for him. I pray that he stays on that path.

I should get my shoes shined a lot more often, not because they need it, but because there are more Aribertos out there to meet.