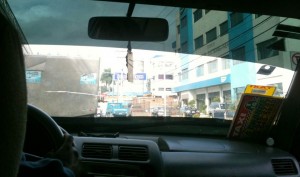 In my life here, I’m trying to completely sidestep this prerequisite for social acceptance by pulling the “gringo card” and using Dominican slang to show that not only am I a foreigner, but I’ve made significant efforts to be a part of the culture. So far it’s worked pretty well.

Any dates I’ve been on have been walkable, or taxiable. It does change the conversation when you can’t say, “I’ll pick you up around 7:00,” but you can say “My driver will pick you up at 7:00.” (Just don’t tell her that it’s Apolo Taxi, and make sure the driver takes away his taxi placard.)

So I’m sitting in this taxi last week talking to the driver about a wide range of topics. It’s true that Dominicans are usually very sociable and could talk about anything for an hour. I feel at home in that respect by the way, but one must note that Dominican taxi drivers take that skill to a whole new level. This guy was hitting just about every cultural topic between here and a kilometer, and deftly maneuvering his tiny Japanese made car through bad roads and aggressive drivers who cut us off.

Both of us see a luxury car fly past us, one that doesn’t belong on this kind of road, and he makes the comment that so many people waste their money into cars like that. He does a few calculations for gas, insurance, and repairs, and “Before you know it,” hey says, “You’re driving around in a mortgage.”

I tell him though, that I don’t think that stuff is really important. Sure, I love cars; in fact, I’d willingly accept a donation of the Audi A7 featured left, but deep down I miss driving my ’98 Honda Accord.

He goes on to say that he’s quite comfortable in his tiny Japanese car and he doesn’t care what people think. He goes through the repair record, or rather, lack of one, saying that this current car has given him less problems in 3 years than that of a troublesome vehicle he had for about 6 months.

He comments about how when he and his girlfriend go out, he can park the car, “On just about every street, or corner. I see a space, and then I’m like ‘whoop . . done’ and we’re parked. Then holding hands going to get some food.” 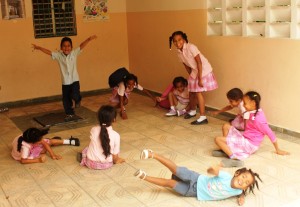 “But you know what?” he adds, “A car doesn’t fill me. No, a car doesn’t do that for me. It’s more important the people I have in my life and the kind of life I live. This car doesn’t break the bank, it allows me to save, takes me everywhere I need to go, and my beautiful girlfriend, well, she just likes to be with me. And she doesn’t like driving around looking for parking either.”

Again, I’m struck by the purity of life down here. The clarity that comes with not just having less, but having more foresight into what’s really important.

You just have to know what fills you, and keep choosing that.