This past Sunday night I went to an outdoor concert at the ruins of San Francisco in the Colonial Zone. From 6:00 – 10:00pm every Sunday, a group of Caribbean music professionals put on a free show for the local community. It’s a mix of Salsa, Merengue and once in a while, Bachata.

To the outsider, it’s cultural bliss. To the insider, just get there early, you don’t want to have to stand on the sidelines. So clearly, when my group of American friends and I showed up, there were no available chairs. No problem though, we found 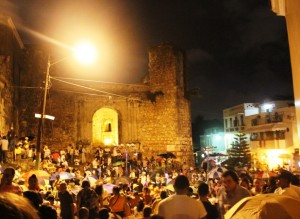 ourselves standing next to a wall. I couldn’t help but think we were the typical wallflowers, the foreigners who had not yet learned to dance like the locals. It felt a bit like 8th grade again.

I suppose one advantage to being on the outside is that you can see all that moves on the dance floor, and in one moment, we saw a beautiful young Dominican woman being spun around what appeared to be an older fella who didn’t seem to be moving all that much. My friend’s comment to my proposed criticism was that, “It’s not so much what you can see that’s important, it’s what’s you don’t see that makes the difference.”

On second inspection then, what appeared to be a grandpa who may have lost his way back to his seat, was instead a youthful, suave, Salsa dancing veteran decked out in red pants, red suspenders, a white shirt with accented red designs, and a red Kangol cap. If you know anything about dance, (or I suppose dating), it’s the man’s responsibility to make the lady look good. And did she!

The next song. Another woman. And one more after that. Now that we had better data, we realized that this guy was in high demand, and boy was he loving it. It was clear that he both danced like no one, and yet everyone was watching him.

He reminded me of Morrie, recounted in the book, “Tuesdays with Morrie” written by Mitch Albom

“He had always been a dancer, my old professor. The music didn’t matter. Rock and roll, big band, the blues. He loved them all. He would close his eyes and with a blissful smile begin to move to his own sense of rhythm. It wasn’t always pretty. But then, he didn’t worry about a partner. Morrie danced by himself. 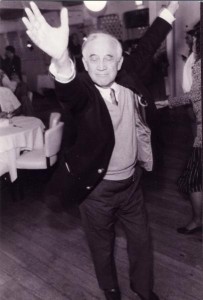 He used to go to this church in Harvard Square every Wednesday night for something called “Dance Free.” They had flashing lights and booming speakers and Morrie would wander in among the mostly student crowd, wearing a white T-shirt and black sweatpants and a towel around his neck, and whatever music was playing, that’s the music to which he danced. He’d do the lindy to Jimi Hendrix. He twisted and twirled, he waved his arms like a conductor on amphetamines, until sweat was dripping down the middle of his back. No one there knew he was a prominent doctor of sociology, with years of experience as a college professor and several well-respected books. They just thought he was some old nut.

Once, he brought a tango tape and got them to play it over the speakers. Then he commandeered the floor, shooting back and forth like some hot Latin lover. When he finished, everyone applauded. He could have stayed in that moment forever.”

Well in our case, when our friend finally finished, he took off his red Kangol cap and bowed to the crowd. Hearty applause rang out. Applause to a guy who knows how to make the lady look good.

I need to take some dance lessons and get there earlier next Sunday. And if I’m gonna dance like everyone’s watching I know I need to make the lady look good.