Take a look at this picture. See anything? Anything missing? 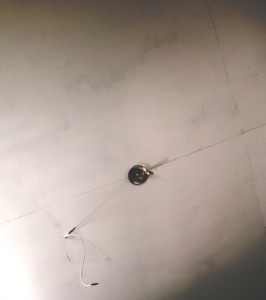 It’s actually a picture of a ceiling inside the low-cost private school Colegio Paso a Paso (“Step by Step”) where someone stole the ceiling fan.

I was sweating, sitting in a chair in the office of director, Haidy Guerrero, when she lamented that she couldn’t turn the fan on for me. When I asked why, she pointed upwards and that’s when I took the photo.

A few weeks prior, some thieves broke into the school and removed the six ceiling fans inside the classrooms. At about $65 ( a weekly salary of an average worker),  that’s a $400 replacement fee that the school could not afford. I think about me, sitting there sweating, and then those kids next door, so disciplined, paying attention to their teachers, not minding the heat 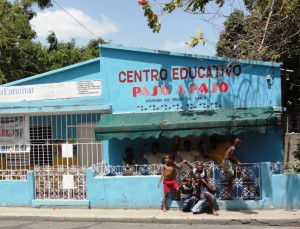 reverberating off the concrete block walls.

Come to think of it, most of the schools in the Esperanza-Edify programs don’t have ceiling fans in their rooms. The kids just deal with it. When students are paying less than US $10 a month to go to low-cost private school it doesn’t leave a lot of room for the administration to use their funds for things like air conditioning or even fans.

But if you think this is a violation of  national school policies, the public schools don’t have fans, and most of these kids will go back to a home that is built from concrete blocks, where one or two wall fans will cool of the five or eight members of their family.

It makes me wonder then, if these thieves broke into the school for the fans, did they install them in their own homes?

Probably not, they resold them for the cash. It’s hot in the Dominican Republic, and the demand for cool air is high.