I was wandering around Lima this past Saturday and passed through Parque Kennedy where there is usually some public event going on and loads of tourists passing through. I saw up ahead a crowd of people gathered around a small amphitheater so I made my way on over to 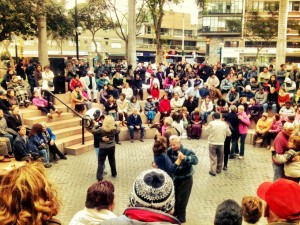 check it out. What I saw first were scores of Peruvians sat closely together with eyes fixed on the center area. Upon closer inspection, I saw several couples dancing, but the unusual thing was they weren’t exactly the young couples I would have expected to see. No, they were older men and women dancing in step with the Latin music.

A song finished, the partners exchanged pleasantries and returned to their seats. A new song began, and the men got up and sought out new partners. Often, they came from the other side of the amphitheater to find their desired partner. It all seemed very well orchestrated, but I knew that this was simply a public event where everyone came to listen to music and watch the dancers, that by the looks of it, came here quite frequently. In sum, it was quite a show for a Saturday afternoon without having to pay anything to enter.

I thought to myself that dancing in public isn’t really something that we do in North America for reasons I don’t think we all really know too well. Usually, people reserve their dance moves for special occasions or for a few drinks into the evening, and if we see someone dancing in public they are usually too little to fall prey to social norms, or they’ve had too much to drink, or maybe luckily they’re a little more well-hidden in the throngs of concert goers out to enjoy a concert in the open air. Rarely, do we such frank displays of affinity for music and dance. 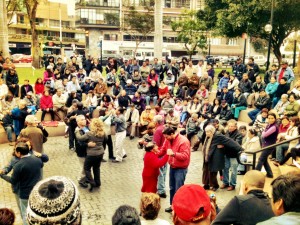 An older woman, much shorter, and certainly more joyful that the rest, arrived to the dance floor barely able to contain her exuberance as a favorite song played. She danced as though she had a partner, and her smile ignited the audience who sat close by. A younger man stepped out from the crowd that sat on the concrete bleachers and grabbed her by the hand. They spun, they danced, they strolled, and tried out the turns and steps that people in the crowd yelled to them. It was like they were the instructors for those who came to dance.

For a brief moment I noticed that they didn’t really dance in time to the music being played, but quickly that feeling disappeared when I did what everyone else was doing: I just went with it and enjoyed the scene. I then looked around and it seemed this odd couple, both dressed in red, had garnered the attention of nearly everyone in the stands. Now, surely, there were better, more fluid dancers, but none were as animated as this couple.

They came to dance in public. No shame in that.

2 thoughts on “The Joy of Dancing in Public”