Greetings family and friends, I had traveled quite a bit this past summer. That’s the reason the July/August Newsletter is coming so late. In one month this summer, I had been to the Dominican Republic for Edify’s Family Camp, to Guatemala for more feasibility study meetings and back to the states for Edify team meetings. I’m happy to report that I’ll be staying put in one place as I just arrived to Peru to begin work on the pilot program for Edify. Our intention is to start the micro lending program for small, affordable Christian schools here in the capital, Lima. The following newsletter is about our Edify Family Camp experience in La Romana, Dominican Republic. Blessings, -Aaron

The Edify Family Experience is a way for families from North America to experience the work that we do in Edify in a school that we support with micro loans and training. We bring families with children that are interested in learning how the model takes shape on the ground and want to participate in a camp that involves the whole family.

For us, family camps are a unique experience because normally our operations involve making small loans and doing business training for these schools. Fortunately, the camps of years past have been a huge success with everyone involved, from the North American families to the local staff and the children in the schools. 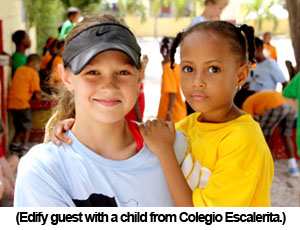 So this past July we spent two weeks in a city in the East of the Dominican Republic called La Romana. Each week we had five different families participate in a four-day camp that involved a work project, English classes, crafts, recreation and a devotional. The final day we had a celebration, like a carnival, where we invited the parents and the siblings of the students. You’re probably very familiar with this description of this kind of camp as it sounds like many short-term mission trips that churches typically do.

At the outset, we explain to our guests that Edify normally doesn’t do trips like this and we’re very clear that the week is about partnership and celebration. We want to build onto what we’ve started with the school. Usually this means that schools come to know us through a small loan for building new classrooms or computer labs, or through business training where they learn to manage their finances. Most often, the relationships we have with the schools are kind of like a business/client relationship, and much like in American business, you don’t always take your friends to see your clients, unless there’s a really good reason. 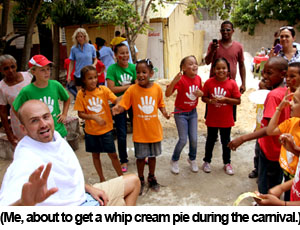 Over the years we’ve developed great relationships with our schools; many really feel like our brothers and sisters, and we want to be intentional about who we introduce to our Dominican family just as they would be intentional about who they introduce to us. As you know, the normal mission trip from  the North American church usually means a large amount of money spent on short-term mission trips where large groups descend on a local community, bring truck-loads of donations, do a bunch of fun activities, and leave the week after. 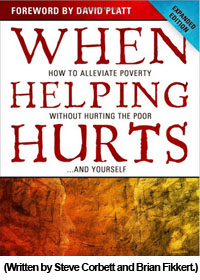 We’re trying to build a program with these schools that doesn’t fade away after the week that the teams leave or the funds dry up. Now, we’re not perfect by any means, but we are trying to do things differently, and we consistently ask our partners and people we serve how we can improve what we do in the communities where we work.

Before any of the families come down to the DR, we ask them to read the book, “When Helping Hurts” by Steve Corbett and Brian Fikkert. It details how poverty is much more than the lack of economic resources, that we can, and many times are, all “poor” (disconnected, hurt, broken and sometimes powerless) when it comes to these core relationships: with God, with our community, with our family and with own selves. We all emerge out of poverty when we start trusting  Christ and begin the process of restoration beginning first with our Heavenly Father.

Before the family camp begins, we discuss the first few chapters to lay the groundwork for the week ahead. We talk about how we are so similar to our Dominican brothers and sisters, even though we’re materially rich, we have all been damaged by the consequences of sin in our nation and in our relationships. We can start restoring this brokenness by restoring our relationships – first with our Creato 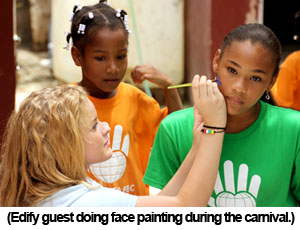 r and then onto each sphere of relationships. So when we go into these schools we must treat each other similarly: as broken as we may be, we know that the path out of it is led by our redeemer, Jesus.

It really changes our perspective when we enter a school as equals. We see smiling children laughing and playing with their friends, hugging their parents goodbye, some are looking shy and apprehensive, and even little ones start crying because they’ll be away from their parents for a few hours. Those are just like children from the United States, and even though these local ones attend schools with uncompleted walls, broken fans, and unpaved roads, they are all here because they believe that Christ has prepared for them a brilliant future through good education. That’s what we believe too as North Americans right? We all want our children to have the best opportunities available and we try to make that a reality in our communities.

In short, it was a very full two weeks full of experiences, trials, and joys, and I couldn’t possibly write all that transpired, but I will share with you a few stories from our Dominican friends and family:
——————————————- 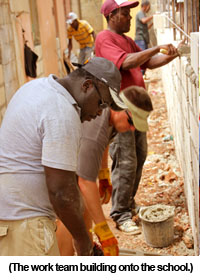 One of our guests had decided to join the work project during the first week. He and his family have done a lot of work with a missions organization that builds houses for economically poor families in Mexico. He’s pretty good with tools, and has a lot of experience in construction, so it seemed like a natural fit for him to join the Haitian and Dominican workers in building onto the school’s wall during the first week.

It was fun to see the North Americans interact with the Haitians and the Dominicans. They all had a similar purpose in constructing the wall and got along really well. During one of the mornings, a Haitian worker was shoveling concrete when he immediately yelled out and grabbed his back. Our North American guest quickly went to his aid and helped him lie down in a classroom. As the Haitian man lay there wincing in pain, our guest came to ask me to help him translate. We walked into the classroom together and he wanted me to help assist the Haitian man. Now, I don’t know if the Haitian man was moaning from pain, or from the fact that he would probably be unable to work for a few days.

Our guest wanted me to speak to the Haitian man (in Spanish) and tell him that he had the same injury from shoveling concrete and a doctor showed him some exercises to relieve the pain. Almost immediately, the composure of the Haitian man changed as he saw someone not only willing to help him, but relaying to him that he had gone through 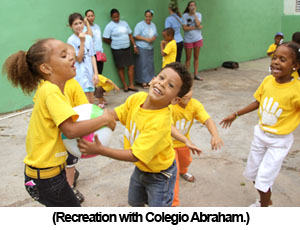 this pain, and had found relief. We all crouched there for a few minutes as our guest helped this man breathe through his pain, and gradually the wincing and the moaning stopped. There wasn’t any language spoken in these minutes; it was as if we were all just teammates trying to help our buddy out.

For our final day celebration, we had a carnival where schoolchildren could win tickets from various games. We rented a bouncy castle for the children to play in. Knowing that these children hardly ever get to jump around in this inflatable house, we made a few decisions to manage the flow of traffic. First of all, to spread the number of children around, we started them off at different stations, and made the bounce house free. As soon as a reasonable number had passed through the house, we 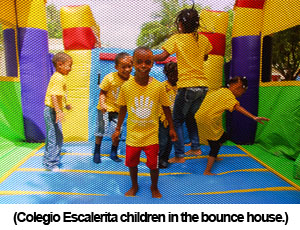 set the bounce house ticket price at five tickets (well below market value). And as many more, almost too many children wanted to go through it, we raised the price to 10 tickets (approximate market value). One young man who had to decide between waiting in line at the free bounce house and playing tic-tac-toe bean bag toss with no line, first chose the bean bag toss to earn tickets. Upon arriving at the entrance to the bounce house, he was told that it now cost five tickets. He left to go earn more tickets and came back with eight. Unfortunately, for him the price had just been raised to 10 tickets.

This same young man, at seven years old, looks up at the bounce house attendant and as politely as he could muster he explains his strife: “This bounce house started out free, later it was five tickets, and now it’s ten. What’s going on here? Are you all crazy?” 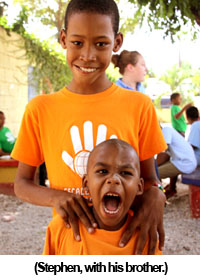 To reward his patience, we let him in for eight tickets.

The orange team, composed of children ages 8-11, had a young man named Stephen who showed signs of mental retardation who, being a few years older than his peers, joined this group because his brother was in it. During the recreation portion of the day, the group split into two teams to do an obstacle course than involved hopping on one leg through a series of cones and passing through an old tire set up on the playground. It was his turn to go, and Stephen had trouble with his coordination and struggled to hop around the course. When he finally reached the tire he hesitated at first, because he was very tall and knew would struggle getting through the tire. As he struggled, his teammates started cheering him on, and began chanting his name. Limb by limb he labored on getting his elongated frame through the old tire, but as soon as he emerged, he raised both hands above his head and yelled. Both teams, teachers, and the North Americans erupted in a victorious cheer.

To finish out our final day each week, we had a celebration with the parents of the schoolchildren and friends and family in the neighborhood. We ordered enough food to feed over 200 people during the lunch break. After the big celebration of the games and the tickets during the carnival, it was a time to reflect on just what community means, and what it can mean for people like us, North Americans, and those who live in more economically impoverished areas. We had a really simple message that the director of the school (pictured left) gave us.

She talked about the importance of family, and how we should treat each other in a way that welcomes them into the family. It was one of those moments that Jesus describes in the Gospel of Matthew:

“The servant came back and reported this to his master. Then the owner of the house became angry and ordered his servant, ‘Go out quickly into the streets and alleys of the town and bring in the poor, the crippled, the blind and the lame.’ “‘Sir,’ the servant said, ‘what you ordered has been done, but there is still room.’ “Then the master told his servant, ‘Go out to the roads and country lanes and compel them to come in, so that my house will be full.” (NIV Luke 14:21-23)

So we sat down, all the colors of the age group teams, all the North Americans, all the teachers, and all the people of the neighborhood. We came with the intention of having a common table, and we feasted like family.

I pray that you would see how God can use you to invite more people to the table.