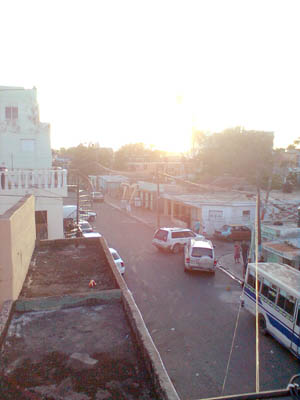 It’s late in the afternoon on a hot and humid Saturday, and we are hanging out in the patio on the second floor of a tough neighborhood in East Santo Domingo called Villa Duarte. As always, it’s great to see the family I lived with and to wrestle with my Dominican brothers, Josias now five, and Railyn who just turned eight. I can tell the boys are growing up even in the year that I’ve known them. I tell the boys that we should go up to the roof to enjoy the breeze that is making its way through the barrio and as I lean on the iron fence that surrounds the roof and I see a young woman transporting buckets and large bottles of water up to her third floor home, and I know that this is something to write home about.

I suppose that when you recognize something that doesn’t normally appear in your day to day life, this is a pretty good signal that some people back home would be equally interested in what you’re experiencing. However, something was different this time, being in this neighborhood and seeing people labor to carry water up three flights of stairs wasn’t all that unusual anymore, so why exactly was I compelled to describe a situation that had become commonplace to me?

Since I moved back to the DR in early February, I’ve tried to go see this family every couple of weeks and one thing that always sticks out to me when I go back to visit them is that when I pass through the main street entrance sometimes there are small rivers running through the gutters in the neighborhood. I say sometimes, because it’s not always that there are rivers that run when it’s sunny and hot outside.

River gutters mean that the neighborhood has water again, that the government temporarily fixed the problem of water supply, and that the neighborhood can enjoy running water for a few days, or sometimes, just for a day. People are out in the streets filling up buckets, or operating the water pumps to send water up to the roof where they keep large storage tanks filled with water. You can sense the excitement that the water has returned, and well, you can see it as the kids dance in the water in the street. I’ve written about this a bit in a previous post (The four-year-old Gene Kelly), and water in the barrio has been something wild and strange to me, certainly fitting for a blog post to write home about, 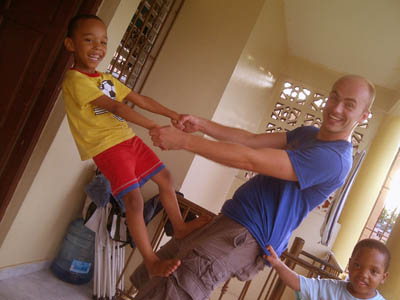 but now it wasn’t exactly from the angle of a someone who just got off the plane.

Something has changed, the DR feels like home, and every time I sit down to write I feel like I’m writing about something less unusual to the people back home. My day to day reality has certainly shifted, and many of the strange quirky elements of the foreign culture have become real and normal to me. It’s not unusual to see young woman labor up three flights of stairs, it’s not strange, no, this is the reality of life here.

I’m struck by this point in my realization that my processing of information, of sights and sounds and experiences has changed. It’s not as new, and it’s certainly not as jarring and shaking to the senses as the arrival and accustomization period when you move somewhere new.

So as I’m standing there looking out into the barrio, I’ve realized that the “newness” has faded when I see her struggle to get the last bottle of water up the stairs. I lived in this barrio, I know what it’s like, I’ve been without water for a few days, and I’ve lived like the locals lived. I think I’ve recognized that when I chose to write home about things in the past year and a half, it has been with a sense of a badge of achievement, an accomplishment, a wild and new thing conquered and realized in the pursuit of adventure. But now, the novelty has worn off, and a question lingers, was their compassion in my initial observation? Or just something interesting to write home about?

Now, the reality sinks in. I’m starting to see the reality for what it is. The terrible infrastructure that prevents thousands of families from receiving the most basic necessity on a daily basis is a daily struggle, a daily, exhausting labor, a painful reality for this neighborhood and hundreds of thousands throughout the island. No one here writes home about this with the perspective of a traveler or “seeing how the indigenous people live.” It’s not strange for them, no, it’s just a harsh reality; it’s simply a consistent frustration that only occasionally water runs through the gutters signaling the arrival of the opportunity to bring water home to the family. And when it finally arrives, you have to carry it up three flights of stairs for your family, because that’s just what you have to do. It’s nothing special, it just is.

I started carrying my 5 gallon water bottle up the stairs to my apartment to see what it felt like. Three flights is hard, but certainly not something to write home about.