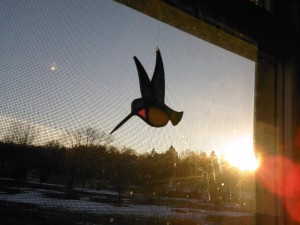 Grandpa made this stained glass hummingbird.

Six years ago when my grandfather passed away, my grandmother requested her grandsons to carry the casket of her husband, 87 years of age, and 60 years of marriage. It wasn’t just that she wanted the strongest, most capable men to carry it; rather, she said that it was the most fitting.

Albert had loved each of us dearly when we were babies. He held us as he rocked back and forth in his chair, carried us around the home, and even changed our diapers. He used to call me “little pumpkin head;” my guess is my siblings and cousins had similar nicknames befitting of their early physical condition.

Now, on that cold, January day in the small town of Warren, Illinois, his grandsons, men of post graduate degrees, working young professionals, and university students would carry the man who once carried them.

How beautiful and mysterious life is, that me, a baby of 7-8 pounds and some ounces, small enough to fit in a wash tub, could grow  to be 6’3” not able to fit into a bathtub. Once, completely dependent on those that provided for every need, I was innocently incapable. We were all like that though, my brother and my cousins, dependent on love to sustain us, for without it we would perish. We were vulnerable and weak.

At 22 years old, tears stinging my eyes as I held them back, I waited to see if my cousins let theirs go. Yes, strangely, I was still vulnerable and weak. I felt like that was ok though. I think Albert knew we had become strong men, both in will and stature, strong enough to carry the man who once carried them. He was dependent on love to sustain him. 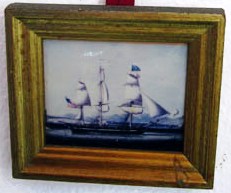 I never got to tell him that I set sail on the greatest adventure of my life, but my grandmother knew.

She told me several times that her Albert would be proud of me. I know she had been carrying many messages for him. She had been saving them up for six years now. To think she’d lived more life with him, than without him – 60 years of marriage.

I can’t imagine all the things she’d been waiting to tell him, things like the accomplishments of her grandkids, new sewing patterns or quilting ideas, corn that needed shucking, and the plans for the big Thanksgiving dinners. When he passed, she said she just wanted to be with Albert up in Heaven. She was really ready to go.

Two weeks ago a stroke set in motion the rapid decline of her health.

I’d like to think she just started packing her bags. 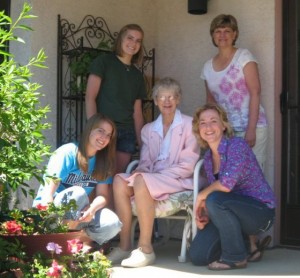 It had been a very difficult two weeks for the entire family. Many tears.

I think she was just firming up the details of her departure.

Sunday night she left to go be with Albert in Heaven.

I imagine her with pockets full of letters, stacks of photos with rubber bands wrapped around them, and printed emails from the family at home and abroad.

She’s coming home grandpa, so make sure the kitchen is clean.

I love you Grandma 🙂