I had been riding a guagua for about 15 min with the same folks up front when I saw something that made me smile.

“Guagua” is the name for a bus in the Dominican Republic, but just here in this country. You won’t find it elsewhere, and you shouldn’t try to use it either. For example, in Chile in means “baby” and you can imagine the consequences when you ask the locals “If I go to the city center, can I take a guagua toward the West?”

Sometimes a guagua route can take a while. With all the stops of people getting off and on, inevitably the time spent on a broken uncomfortable “seat” will be doubled, even tripled. (Don’t ask me about the heat of summer, that time gets exponential.) But this afternoon, we didn’t have that many passengers coming and going, the route was simply a long one. We had just turned a corner onto La Avenida Bolivar and a gentlemen on the left reaches over across the aisle and smacks the arm of the guy sitting on the right.

“No sabia que tu estabas en esta guagua!” (I didn’t know you were on this bus!)

Turns out, these two friends had been riding the same guagua for awhile, headed in the same direction, and didn’t even realize it. Their exchange of words were simple in their content, but the tone of brief conversation revealed that they had known each other for quite awhile and judging by their age, possibly years of friendship. 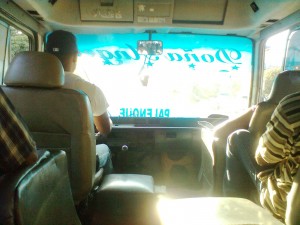 I believe you can always tell when you’ve got a good friend, in that you never need to work for conversation, and indeed it was this way with them. And similarly, with good friends, you may not even need to talk so much. For these gentlemen, the length of conversation wasn’t important, both were satisfied in their happenstance meeting, and didn’t worry themselves in creating a big reunion anymore than any other day. After all, they were on the same route home. There would be plenty of time to catch up later.

All these details pooled together to give me better definition of how I think friendship can be expressed:

When you realize you’ve been headed in the same direction for quite some time and one of you has to smack the other one to get them to recognize that you indeed have been friends for the whole journey.

I know I’ve got a few people I need that I need to lean over and smack, so before you think I have to apologize, get ready to say thanks.