I was sitting on a guagua (see recent post for definition) coming through El Salvador when a Canadian asked me, “I think it’s so rare to find American traveling through Central America, what led you to make that move?” Before I jumped into all the ego-boosting reasons why it was so rare, cool and unusual for someone like me to be traveling around, I actually stopped to think about the question. Why did I want to travel?

Well that answer has been explored throughout this blog over the past two years, but I know for sure that there’s one experience, or set of experiences, that shaped me growing up. 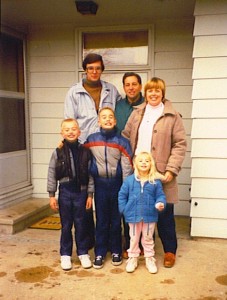 As a kid, I knew it took longer than 4 or 5 Sesame Street programs (this was my unit of time back then) to drive to Warren, IL from Waterloo, Iowa or from Elgin, IL, and I also thought that was a really long way to drive for food. I’m not sure why we had to go through all the hassle of loading everyone up in the mini-van for something I know mom could have made at home.

Clearly, Thanksgiving is, and always has been more than a meal, and certainly, going to Grandma & Grandpa’s house in Warren, was always an adventure and an international one as well. It was there I learned that not all Russians were communists (Sergei was tall and kind – pictured right) and not just vampires came from Transylvania (a husband and wife explained the difference between Hollywood and reality).

Now, a town of about 1,428 (2010 census) may not seem like a huge international tourist stop, but when we look at Wikipedia we see that Warren hosted many visitors in the past:

“Captain Alexander Burnett was the first known American settler in present-day Warren; he built a log cabin at the corner of what is now the corner of Main and Water Streets in 1843.In 1851 a stagecoach stop was erected on the Stagecoach Trail, the building still stands and is now serving as the Warren Community Building.The village was platted in 1853 along the proposed route for the Illinois Central Railroad tracks and later growth in Warren was heavily influenced by the presence of the railroad. (wikipedia: http://en.wikipedia.org/wiki/Warren,_Illinois)“ 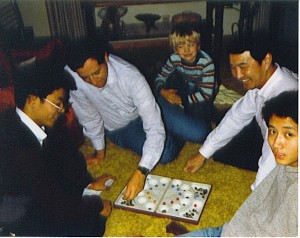 My grandfather, Albert, was a superintendent of schools and my grandmother, Helen, had gotten her masters in education, taught for a good many years and raised three boys and two girls. Education, raising children, and being involved in the local and international community were always important to them.

My guess is that when all those kids left the house, they had to fill it with new ones. Maybe they just missed the noise, but they always seemed to host guests from other countries, and it was always around Thanksgiving when I got to meet them (here’s me trying to learn a new board game – pictured left).

I asked my mom about three years ago how many international travelers my grandparents had hosted and how many countries they’d visited over the years. Here was her reply: (1/15/09)

“[Grandma] said there were 2 guys from Jordan-I remember one’s name was Zadie. She remembered Sergei from Russia, she said there was a couple from India. She couldn’t remember all the countries she and dad visited but I would ask her some names and she would say yes or no. We came up with 25!! They went to 8 elder-hostels in other countries. Here are the names of the countries:

They went to Brussels to see their Foreign Exchange student Antonio and his wife. Previously they had gone to their wedding in the Netherlands and got to sit in a place of honor in the castle where they were married! They went to see Lyle in Germany when he studied there for a semester. Mom was in a teacher exchange program in Japan where the students brought their own typewriters to class everyday and then the students would clean the schools and then go to the bookstores and stand and read books for a couple hours. 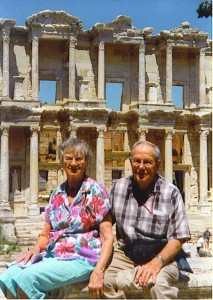 Mom and dad had stuff in their home that different guests would have given them. You probably went with grandpa Tucker when he took the guests to the cheese plant and then to the dairy farm. And of course, they went with us to the Apple River Canyon area to help us “Shoot” a Christmas tree!

To me, the lesson as a young child was this:

The world is big and mysterious, so go explore!

That’s something that’s stuck with me all these years.

So yeah, that’s part of why I’m here, doing what I’m doing. That’s what I told the Canadian in El Salvador, and that’s what I tell the locals why a 6’3” white dude is walking around the community where they live. It started a long time ago, in a small town, over a big table, with tales from travelers from all over the world.

Thanks grandma and grandpa.